Maybe you have an eye problem and want to start dealing naturally. Or you know that your child is at risk of wearing glasses and you would like to do your best to avoid it? Then you have come to the right place and read on.
Eye care  should start sooner than when we found out we have a problem. The complexity of eye care consists of a varied diet composed mainly of fruits, vegetables and nuts, which contain the necessary nutrients. And what are they?

Lutein and zeaxanthin are yellow carotenoid antioxidants known as macular pigments. They are part of the carotenoid family, a group of 600 beneficial compounds synthesized by plants. These are the only 2 carotenoids found in the macula and retina of your eyes, where they help filter out potentially harmful blue light, thus protecting your eyes from damage. Several studies suggest that these plant compounds may prevent cataracts and prevent or slow the progression of age related macular degeneration. Over two years, those who took supplements containing 15 mg of lutein three times a week experienced improvement in vision.
Our Mary Ruth's Eye Care Gummies contain both zeaxanthin and lutein.

This combination of vitamins can lower levels of homocysteine, a protein in your body that may be associated with inflammation and an increased risk of developing age related macular degeneration.
Folate and vitamin B12 from Life Extension contains vitamins B9 (folic acid) and B12, we also have pure liquid Vitamin B12 from Good State, Methyl B12 from Mary Ruth Organics or MaryRuth's B-complex, which contains vitamins B3, B6, B9 and B12.

The long chain omega-3 fatty acids EPA and DHA are important for eye health. DHA is found in large amounts in your retina, where it may help maintain eye function. It is also important for brain and eye development during infancy. Thus, DHA deficiency can impair vision, especially in children. Evidence also shows that taking omega-3 supplements may benefit those with dry eye disease. Besides helping form the cells of your eye, omega-3 fats have anti-inflammatory properties which may play a role in the prevention of diabetic retinopathy.
Our MaryRuth´s Omega-3 comes from a safe plant source.

Your eyes contain high levels of zinc. Zinc is part of many essential enzymes, including superoxide dismutase, which functions as an antioxidant. It also appears to be involved in the formation of visual pigments in your retina. For this reason, zinc deficiency can lead to night blindness.
Our MaryRuth´s Zinc, Eidon Ionic Zinc or Ionic Zinc from GoodState are all preparations with high absorption and without unwanted added ingredients.

Your eyes require high amounts of antioxidants - more so than many other organs. The concentration of vitamin C is higher in the aqueous humor of the eye than in any other body fluid. The aqueous humor is the liquid that fills the outermost part of the eye.
MaryRuth's Liposomal vitamin C is GMO free, has high absorption and a great taste.

Gamma-linolenic acid (GLA) is an omega-6 fatty acid found in small amounts in the modern diet. Unlike many other omega-6 fatty acids, GLA appears to have anti-inflammatory properties. Some evidence suggests that taking evening primrose oil may reduce the symptoms of dry eye disease.

Vitamin E is a group of fat-soluble antioxidants that protect fatty acids from harmful oxidation. Since your retina has a high concentration of fatty acids, adequate vitamin E intake is important for optimal eye health.

As an antioxidant, riboflavin has the potential to reduce oxidative stress in your body, including your eyes. In particular, scientists are studying riboflavin’s potential to prevent cataracts, as prolonged riboflavin deficiency may lead to this condition. Interestingly, many individuals with cataracts also are deficient in this antioxidant.

The main function of niacin in your body is to help convert food into energy. It can also act as an antioxidant. Recently, studies have suggested that niacin may play a role in the prevention of glaucoma, a condition in which the optic nerve of your eye becomes damaged.
MaryRuth's B-complex is GMO-free and contains vitamins B3, B6, B9 and B12. 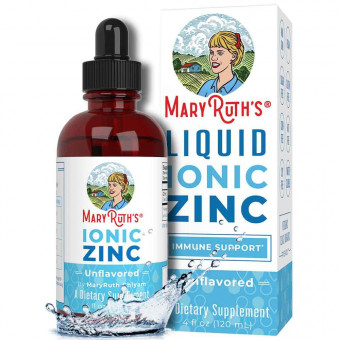